ScandiFest 2013 was a Great Success!!

We had a great time at ScandiFest this year.  Sixty-one people attended.  We had a fun time and enjoyed the great teaching and wonderful music by Bob, Leslie, and Irene!  Thanks so much for a great workshop!  We hope to see you all at our regular dances!

We learned the following dances:

Photo credit: Mange takk (many thanks) to Andi Holmen of Red Lodge, Montana, for all of the following photos.

* Pre-registration required for Lunch and Dinner!

The evening party and dinner are open to everyone (not just workshop attendees). Come have some fun with us! Parents are responsible for their children.

Thanks to the generous grant from the Utah Arts Council, the party admission will be free for everyone!

Lunch may be purchased by pre-registration only.  Lunch is sandwiches and fruit.  You are also welcome to bring a sack lunch, if you prefer.

Dinner may be purchased by pre-registration only.  Dinner is catered by Copper Grill.  Dinner menu includes:
Mmmmm!!

Potluck snacks for the workshops are encouraged. 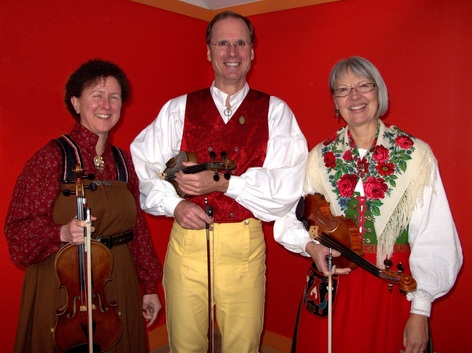 Leslie, Bob, and Irene
photo credit: Natalia Hamilton
Leslie Foley: I began playing Swedish fiddle music in 1978. That year I joined Bud Johnson, his daughter Laurie, and two of my sisters in the formation of the Rolling Bay Fiddlers, with whom I played Swedish dance music for seven years. Bud was deeply influenced by fiddlers from the heart of Dalarna, and he in turn touched all of us with his love for that music. I know it colors my fiddling to this day. I attended summer workshops at festivals in Sweden in 1980, and have enjoyed many workshops from visiting fiddlers since then. Among my favorites have been Pål Olle, Paul Bäckström, Björn Ståbi, Kalle Almlöf, Jonny soling, Pers Hans, and Per Gudmundson. From 1980 to 1985, I led the Seattle Skandia Folk Musicians Guild (now called the Skandia Seattle Spelmanslag).  Nearly fifteen years ago, I joined Seattle's Scandinavian dance band Hale Bill & the Bopps, with whom I still very happily play today.I began Scandinavian dancing in roughly the same year. I have taught with Gordon Tracie (indeed, I was his partner when he first came to Salt Lake City to teach in 1980) and Greg Ostergren for Skandia Folkdance Society classes, and with Art Hare for a series of classes at Pacific Lutheran University in Tacoma. I have attended various dance workshops over the years and am constantly torn between my love of fiddling and my love of dancing. I'm delighted to have a chance to come to Salt Lake City and share both of them with all of you.

Bob Hamilton: I started dancing in 1978, doing Scottish Country Dancing while I was at University in Tucson, Arizona. I did that intensively for several years, then moved to Seattle to go to grad school. In Seattle I first encountered Scandinavian couple dancing in 1984 and haven't looked back (although I also quite enjoy contra dancing). I've been in a Swedish performance dance group, and also have been a member of the Skandia Folkdance Society for many years. I have "danced up" in Sweden and have the bronze medal (awarded for completion of the first cycle of testing that continues for 5 years). I started playing the fiddle in 1989, and have attended the Malung School of Folk Music summer session for two summers. I play in various ad hoc trios, quartets and quintets and play for dances several times a year. I have also taught polska dancing, usually the polskas from Eastern Dalarna, for Skandia dance classes.

Irene Myers: Coming from Minnesota, I have nordic roots but traditional nordic folk music first became a true concept for me when I heard Swedish polskas played for dancing by a Seattle-area foursome of fiddlers led by Bud Johnson. That was 1976 and I was hooked!  I have been actively playing in and/or directing groups ever since then, including Hjärtspel, Sus, Michaelsen & Myers, Swedish Steal, Speldosan and currently Hale Bill & the Bopps.  I have led numerous workshops on repertoire, technique/styling and harmony.
We in the Northwest have been blessed by the teaching of a host of visiting Nordic folk musicians over the years, including greats such as Bjorn Ståbi, Ole Hjorth, Pers Hans Olsson, Pål Olle Dyrsmeds, Jonny Soling, Kalle Almlöf, Bengt Jonsson, Jon Holmen, Eva Rune, Kajsa Ekstav, Mats and Ulf Andersson.  I had the wonderful opportunity to spend the academic year 2009/2010 in Malung, Sweden, immersed in the teaching of Jonny, Kalle, Patrik Andersson, Jonas Hjalmarsson, Fredrik Lundberg and other faculty.  This and other visits to Sweden have also afforded the chance to perform with Swedish folk groups from duos to spelmanslags on numerous occasions in various parts of Sweden. In 2011 I took part for the first time in the annual Zorn Uppspelning and achieved the “diplom” level.
In 1986 I served on the coordinating committee for the first Northwest Spelmansstämma and produced the first Allspel recording of local common repertoire in conjunction with that event.  I also directed the next two Allspel recording projects completed in 1994 and 1998.  (A fourth has come out earlier this year.)  Prior to the Allspel CDs I coordinated Speldosan’s recording ‘Nordic Homespun” in 1984 and most recently our 2008 CD by Hale Bill & the Bopps.